Money Advice Scotland’s Annual Conference over the years has become an institution in Scotland. Not just for money advisers, but for everyone who works in the debt industry across the UK.

For many it is a permanent fixture in their diary (I say that with authority, having attended my 11th conference out of the last 12 years).

However, this year was special as Money Advice Scotland (MAS), an organisation historically seen as the voice of Money Advisers, in Scotland, celebrated its 30th birthday.

So how did it go? 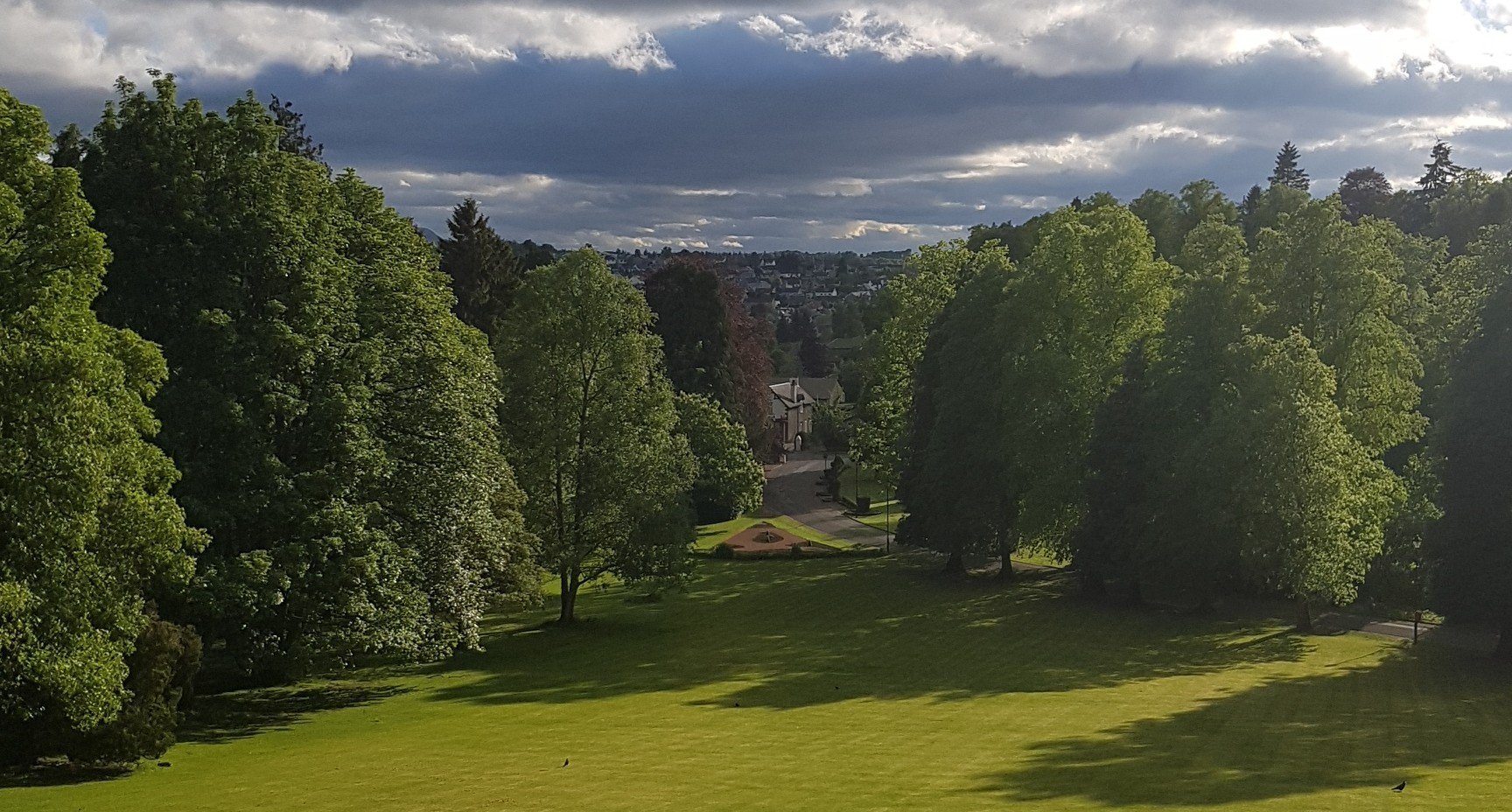 One of the main features of a Money Advice Scotland Conference is  the venue. It’s often the star of the event. This year was no different with it being held in Dunblane Hydro.

These events do tend to ooze luxury and comfort and although some may feel this is not appropriate for an event where the subject matter is problem debts and poverty; the reality is even in previous years, in central and urban locations, the price of the two-day event has rarely varied.

Also, as in previous years, there were large numbers of subsidized places available for free sector money advisers. 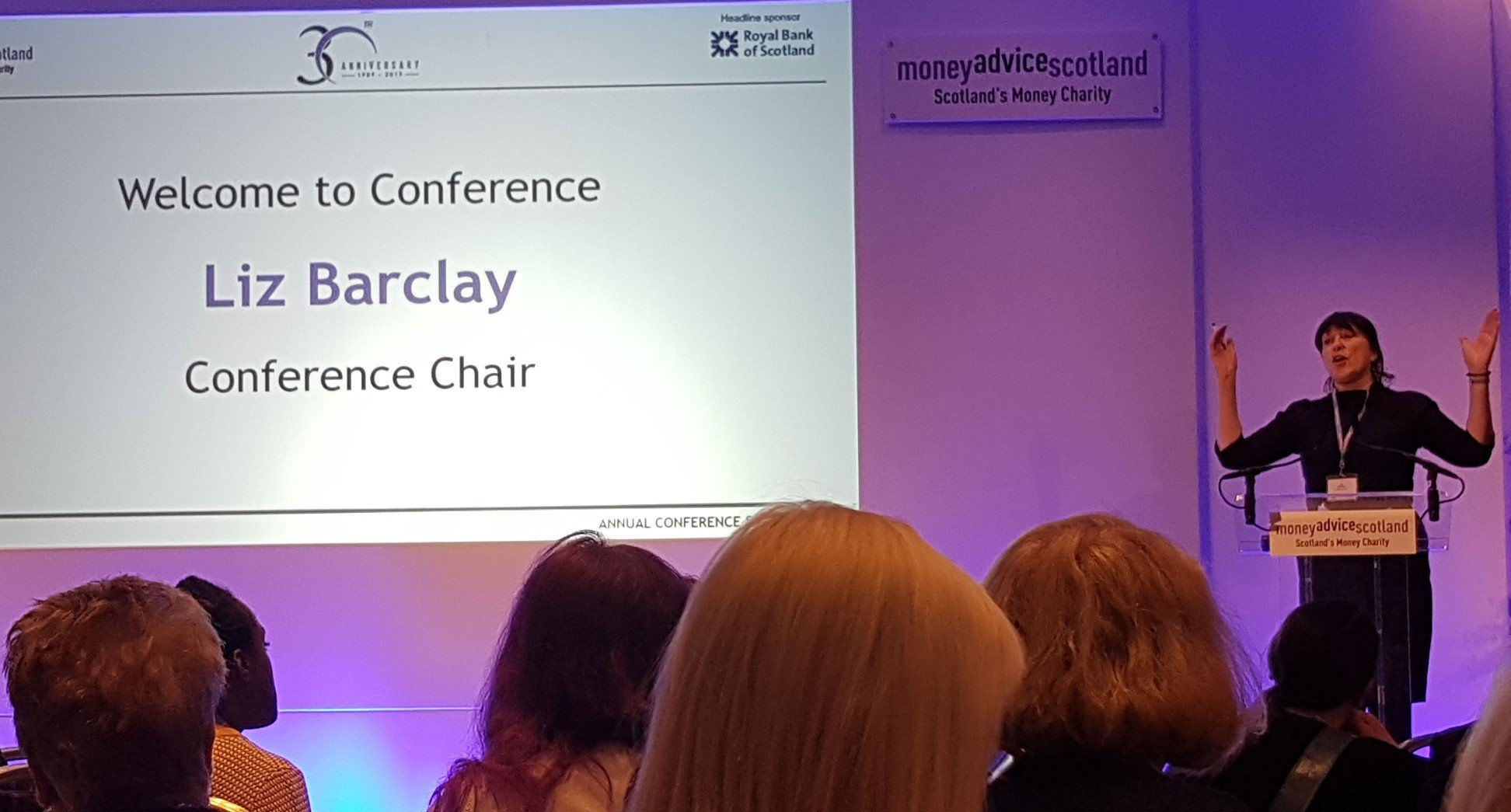 As you would expect Liz is a polished and experienced presenter and quickly got the morning off to a strong start, bringing to life the event, before introducing MAS Chief Executive, Yvonne McDiarmid (OBE).

Yvonne then took the opportunity to champion the successes of Money Advice Scotland over the last 30 years and emphasised the organisation was still  as relevant to the Money Advice Sector today as ever.

Yvonne was followed by Brian Holland, Head of Commercial Planning for the Royal Bank of Scotland, who gave a slick performance.

The two highlights of which were his justification for closing bank branches and his apology for RBS’s role in almost bankrupting Britain.

Regarding the bank branch closures, I was astounded by his brazenness.

However,  he justified the closures by referencing the under-use and pointed to the exponential take up and use of banking apps.

As I sat there I reflected on when I last went into my local branch or even wanted to, then grudgingly had to concede he had a point.

His apology for RBS’s role in costing the British taxpayer £45 billion was less accomplished.  Particularly when he explained they have only managed to repay £1 billion since the crash (I am sure his polished voice drifted off at that point).

I got the distinct feeling I was being fed a PR line, underpinned by a strategy of getting the elephant in the room out the way fast.

Unfortunately for Brian, the elephant didn’t budge, and I think many other public and third sector workers around me were probably thinking about the same thing: draconian levels of cuts that free sector money advice agencies had suffered over recent years.

Brian, however, almost pulled it back when he acknowledged banks had to pay more money for free debt advice, with current services only having the capacity to meet a third of current demand.

He also supported Sir Hector Sants, who recently called for the FCA Debt Advice Levy to be increased by £100 million.

I say almost, because he then highlighted  the fact utility companies and local authorities didn’t contribute to the FCA Debt Advice Levy.

Apparently oblivious to the fact that Local Authorities in Scotland’s remain the largest provider of funds for free debt advice.

Similarly, Liz Barclay’s question to the audience made no sense:

It’s hard not to think Stepchange’s agenda is being pushed here, as although Council’s are the biggest funders of free advice in Scotland, they don’t fund Stepchange or participate in the Fair Share Scheme.

However, the other argument is Stechange is funded by the banks, has substantial reserves, whilst the banks are largely responsible for the savage cuts local authorities have been making and these have fed down into money advice services (thanks Brian!). 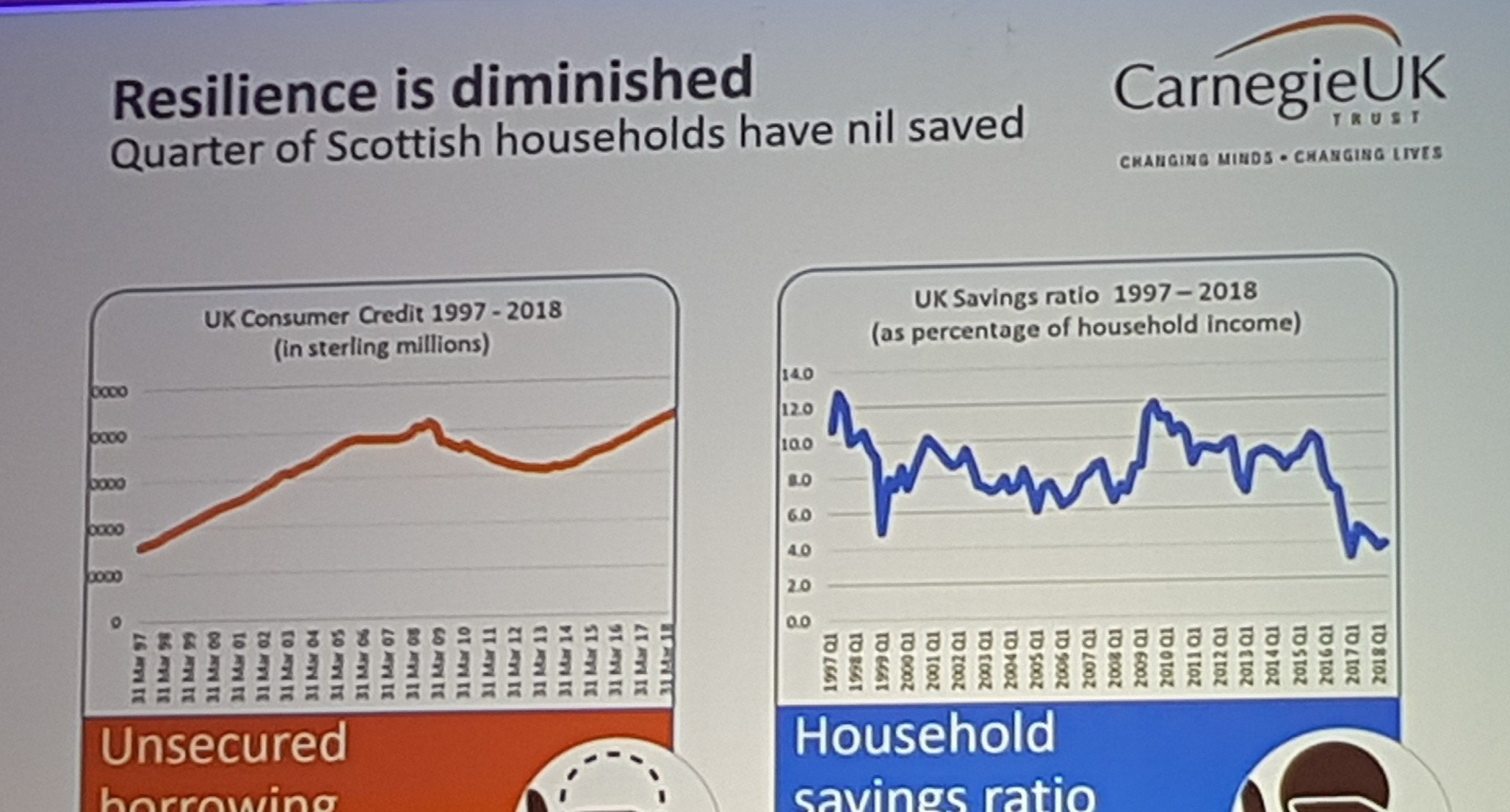 The second speaker, Niall Alexander from the Carnegie Trust, was equally accomplished and led the audience through a series of fascinating slides on affordability, prices and the value proposition.

I wanted to intervene and suggest a slide on rising numbers going to food banks might answer his question:

“where are people now turning , now they can’t get payday loans?”

Also, I wanted to point out the Scottish Government’s £1 million to make affordable credit available was paltry, when you considered the scale of the shortfalls in Scottish Council’s Welfare Funds,  which was leading to people having to go to food banks.

What relevance is the Money and Pension Service?

The Afternoon session after the Workshops was probably the most infuriating, with Caroline Siarkiewicz speaking for the new formed Money and Pension Service (MAPS) (formerly Money Advice Service).

The speaker who dropped the clanger of the Conference definitely went to to Caroline, when she told delegates they should be grateful that Scotland has a Country Manager, as England doesn’t.

It does, however,  have their Head Office at 120 Holborn, London, where substantial amounts of their staff are employed and their £100 million annual budget is spent.

It made me think of pre-devolution Scotland,  when Scots were told to be grateful they had a Secretary of State, as England didn’t.

Days long gone now: Scotland has its own Government and Parliament (although it appears the colonial mindset remains strong in the Money and Pension Service).

Caroline did explain they were there to listen and then unveiled what appeared to be a whole strategy for debt advice in Scotland going forward, none of which myself or most Scottish advisers would have seen before.

It did make me think, were they completely delusional, or did they know something I didn’t.

The fact the FCA Debt Advice Levy is now devolved to the Scottish Government, most debt laws are devolved, and Scotland has a completely different advice landscape to England made me wonder, what relevance is MAPS when it comes to debt advice in Scotland?

Now have they consulted with the Scottish Government on this? Or is it just their expectation their Country Manager will roll it out across Scotland? 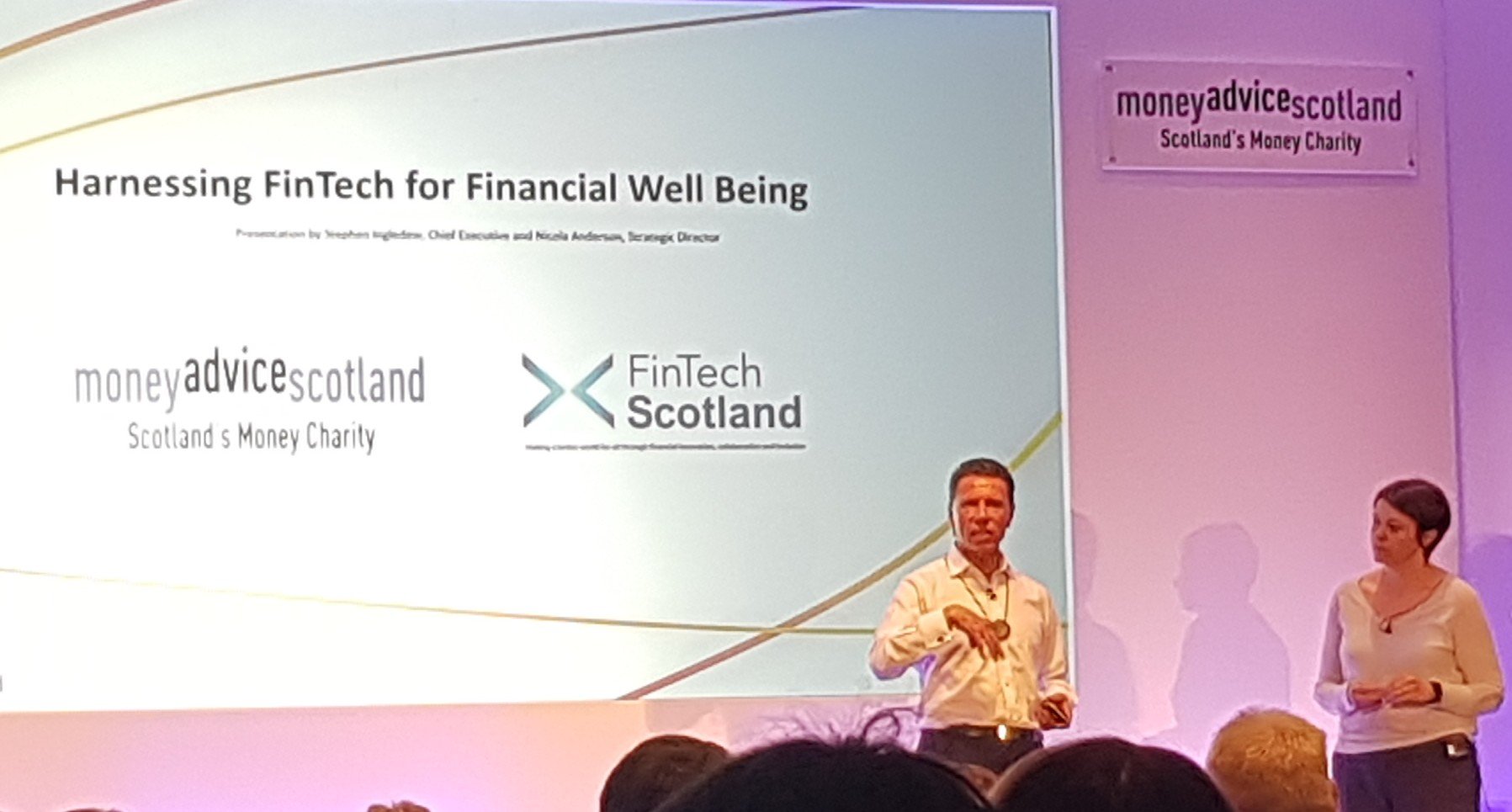 The second day of the conference began with an excellent exploration of how digital technology could be used to increase capacity for money advisers and was led by Fintech Scotland.

It feels like everyone knows this must happen and there is a real hunger for it to happen, but no-one knows how it will happen.

As usual there were concerns about big data, open banking and whether clients would buy into the use of new technology.

On both days there were also Workshops and for me the highlights were How Experience Informs Policy Making by Raahki Odedra from the Bank of England. Raahki delivered a dummies guide to how the bank uses data to adjust interest rates to meet inflationary targets.

What I loved about Raahki’s presentation was she made something  complex, simple.  She also confirmed to me, yep, maybe I do know a bit about economics.

Raahki is the type of person when you listen to her, you know you are not the smartest person in the room,  but your are glad you are there listening. It was hard to not think I was getting value for money. 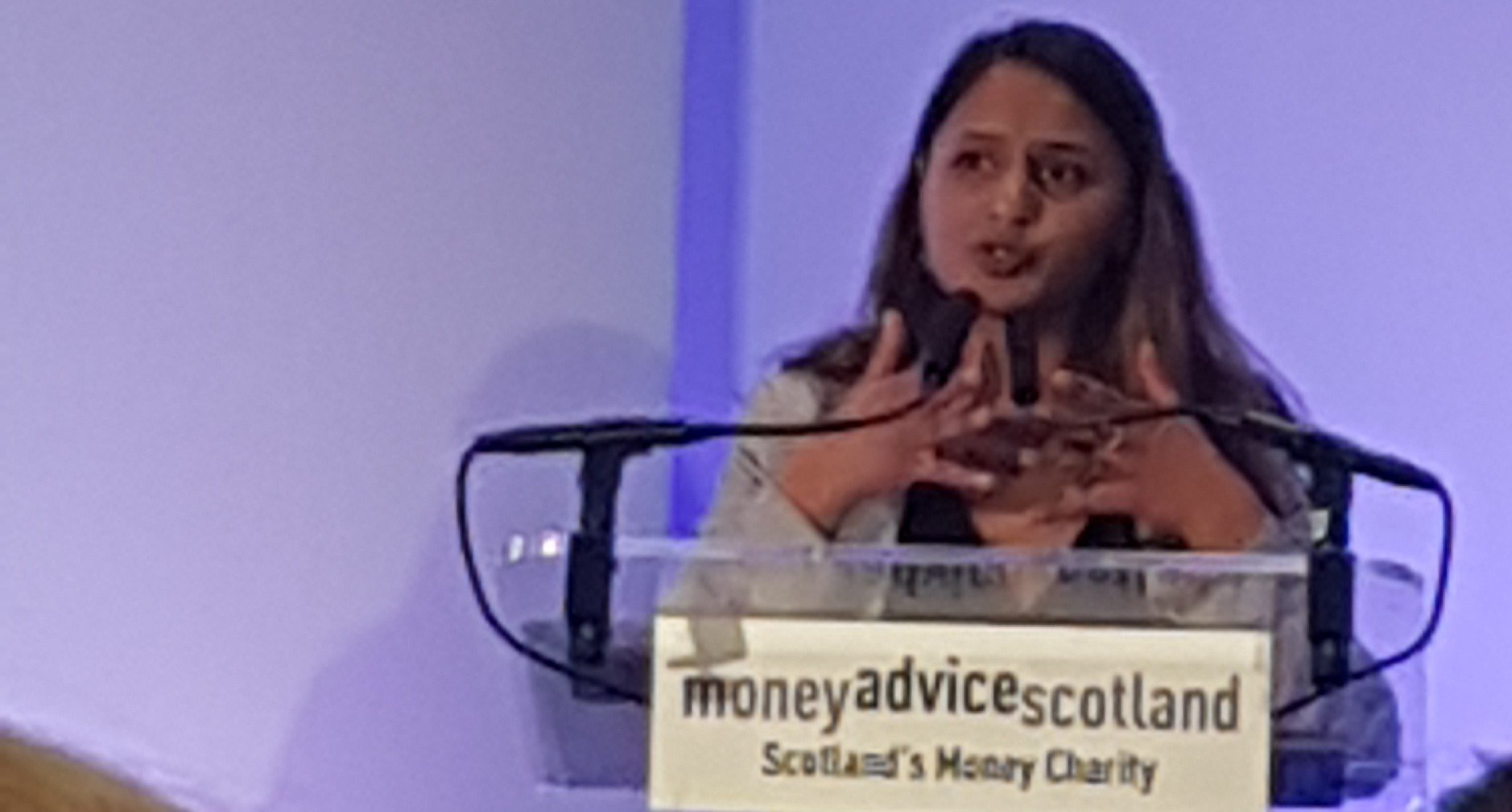 The last Workshop of the day worth noting was the one on Adviser Welfare, which is the subject of research being carried out by Money Advice Scotland, using funding provided by the Scottish Government.

Easily the largest attended workshop of the two days, the interim report for the research revealed nothing that was new: short-term contracts; insecurity; workplace pressures of dealing with clients and the Accountant in Bankruptcy.

However, at least that stuff is now being formally researched and may inform the Scottish Government’s workforce strategy going forward. 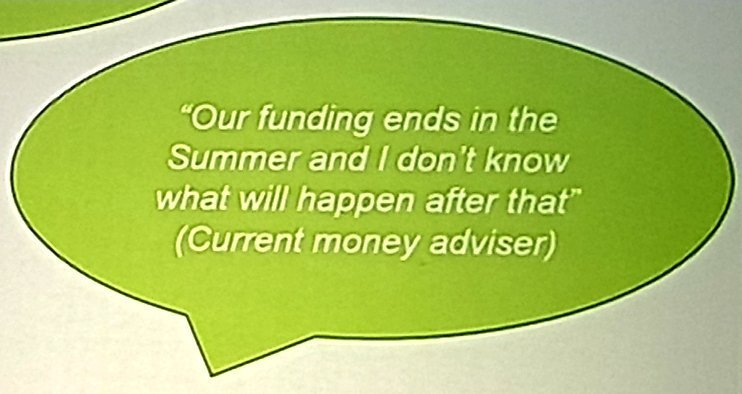 So, thirty years on, where now does Money Advice Scotland stand?

Money Advice Scotland is an organisation that was formed by Money Advisers, built by money advisers and supported by them for most of those thirty years.

They have been its backbone and the basis of any authority Money Advice Scotland has commanded over those thirty years.

Where does Money Advice Scotland now stand? For me the answer is further away from those advisers than at any point in it’s history.

With each year that passes, it becomes more and more obvious, the Money Advice Scotland Conference is no longer a money advice conference, it is now a debt industry conference.

Speakers attend from creditor agencies and debt collection agencies and give example of what they are doing to help clients.

When, however, was the last time we had a money advice agency on stage showcasing and sharing the work they are doing in Scotland to help clients (other than Stepchange)? There is no shortage of agencies that could step forward.

The truth is that role has been taken on by the Improvement Service, who have become the true champions of free Money Advice in Scotland.

They never miss an opportunity to showcase the work  of agencies to make the case for increased funding.

Money Advice Scotland is more likely to be competing with you for funding!

So is Money Advice Scotland still relevant to Money Advisers?

Membership is dropping, Conferences are not attended as much, (some of which is to do with austerity and funding cuts – thanks Brian!).

Some good work is being done by the staff at Money Advice Scotland.  The Adviser Welfare research is just one example.

However, Money Advice Scotland relevance has slid along way for many money advisers over the years.

I would suggest if  it wants to get that back, like another MAS (now the Money and Pension Service), it needs to start listening again.

This site uses Akismet to reduce spam. Learn how your comment data is processed.